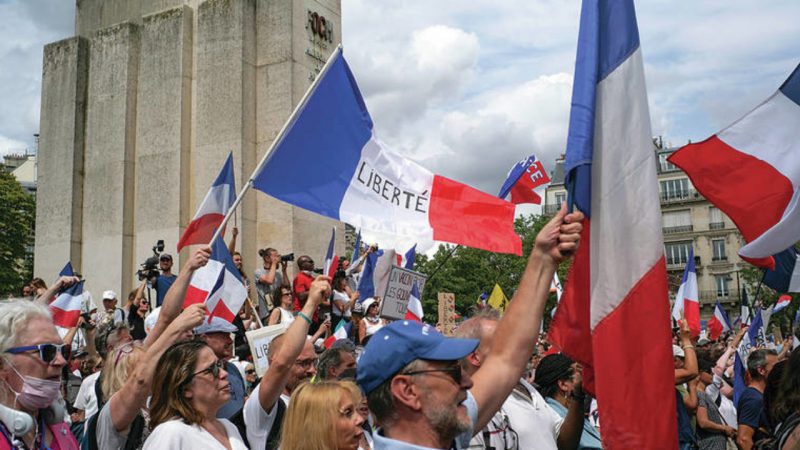 Vaccine mandates have been a problematic topic for lawmakers throughout the world. The Delta variant of COVID-19 is spreading worldwide, so governments are trying to stop the virus.

In France, tension has been high between citizens and lawmakers as a potential bill enforcing the COVID-19 vaccine in restaurants is being discussed. Additionally, all health workers must receive the shot to work in the field under the legislation.

The ladder part of the bill has not been criticized like the restaurant portion. There are health workers that are upset, but this group is highly vaccinated in France. Similar protests are occurring in Italy over laws, but the weekend riots were constant in Europe.

France’s adult population is highly vaccinated, but the government is attempting to speed up the inoculation rate. On Saturday, 160,000 people gathered in the streets of Paris to rally against the potential bill requiring the COVID-19 vaccine in France.

The demonstration of French nationalism and sovereignty turned into a riot very quickly. However, police were able to combat the hatred in the streets with water cannons and tear gas. The protests occurred on Saturday as a bill was being discussed in the Senate.

The lower house of parliament agreed to the bill on Friday, which sparked riots throughout the country. Lawmakers created the bill to slow the virus spike and rise in hospitalizations in France.

Legislators spoke to the France people saying that the bill is necessary to prevent another lockdown in the country. Although, this increased the intensity of the protests because French citizens are ready to return to normalcy.

There were two main groups of rallies on Saturday. The first occurred at Bastille Plaza, where citizens gathered before marching through eastern Paris. The other hotbed for protests was near the Eiffel Tower on the opposite side of the Seine River.

Other Regulations in the Country

The French government has been difficult for COVID-19. They have locked down the country and major cities like Paris multiple times. Although, there are still virus problems that have irritated countless citizens.

Conservative politicians joined and led many protests in the nation. This legislation has been pushed by liberal lawmakers, which has been the case throughout the world. A recent measure from President Emmanuel Macron required a health pass that’s required to enter museums, movie theatres, and tourists’ sites.

The health pass compounded this anger of the potential legislation. To receive the pass, a person must be fully vaccinated, have a negative COVID-19 test, or prove they have recovered from the virus.

The bill would add restaurants and bars to the health pass and tighten the restrictions requiring citizens to be vaccinated. There have been over 111,000 deaths in France from COVID-19, and there are 20,000 new infections occurring every day.

In July, there were less than 3,000 per day consistently. There is an influx of COVID-19 vaccines that the government wants to utilize, but people are not prepared to receive the immunization.

Citizen Ayoub Bougila demonstrated this idea perfectly. He said, “We need to wait a little bit before the French people can decide. I think a part of France is always going to be unwilling and that blackmail and threats won’t work.”

Get REAL, UNBIASED coverage of the latest political news from our experts at World Politics News.
Follow us on Social Media to receive instant updates on the latest news.