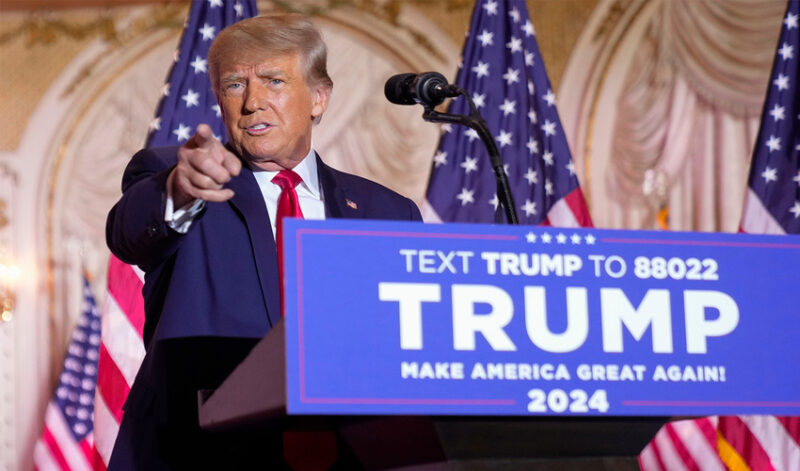 There are uncertainties that loom over the West, including America. Will the person who attempted to rig the 2020 presidential election, threatened to break up the most potent military alliance in the world, and made out with Vladimir Putin decide he wants to run again? If so, can he be stopped? Asking can seem premature. However, the first primary in 2024 is less than 94 weeks away from the previous general election. And despite his dismal performance in office and his despicable actions after being ousted by American voters, Donald Trump’s hold on the Republican Party has become more robust.

Donald Trump, a former president, will bid for the Republican presidential nomination in 2024. He aspires to be the second commander-in-chief to be chosen for two separate mandates. Trump told the throng assembled at Mar-a-Lago, his seaside resort in Florida, where his campaign will be based, “To make America great and magnificent again”.

Trump made a largely muted speech full of false and inflated claims about his four years in office, surrounded by pals, aides, and conservative influences. He sought to arouse nostalgia for his time in office, frequently drawing comparisons between his first-term accomplishments, the Biden administration’s policies, and the current economic situation. This was done despite having a historically polarising presidency and his role in encouraging an attack on the US Capitol on January 6, 2021. Numerous perceived victories, such as the restrictive immigration policies, corporate tax cuts, and pro-religious freedom laws, still generate significant opposition.

His inaugural address came across in the speech as a recap. America has been forewarned. Expect the upcoming months to be a never-ending pity party, fed by a bottomless pit of complaints, unless “45” is sent to prison shortly. He refers to himself as “persecuted” and “a victim.” Unfairly, his son Eric has been served with several subpoenas.

What have people’s opinions been?

It’s questionable if this witches’ brew will be sufficient to propel the one-term president past potential competitors and the West Wing’s current occupant to victory. Ivanka Trump has already said she will not support her father’s campaign, saying, “This time, I am choosing to prioritize my young children.”

Trump has recently tempted crowds at his rallies by implying that he will run in 2024.

At a rally in Georgia in March, Trump reiterated the false claim that he had won the 2020 election, saying, “The reality is: I ran twice, I won twice, and I did far better the second time.” And now we might have to repeat the process.

For the time being, he is seeking and receiving advice on whether to run and, if so, when to do so.

Miller refrained from going into specifics of his conversations with Trump on the subject, “he always seeks advice from the unlikeliest of places and a vast pool of voices.” “I hope he runs again in 2024.”

Don’t forget to check the latest betting odds political. Follow us on Social Media for more 2024 US Presidential odds & updates.