CLOSE TO 50 PEOPLE DEAD IN STAMPEDE AT FESTIVAL IN ISRAEL 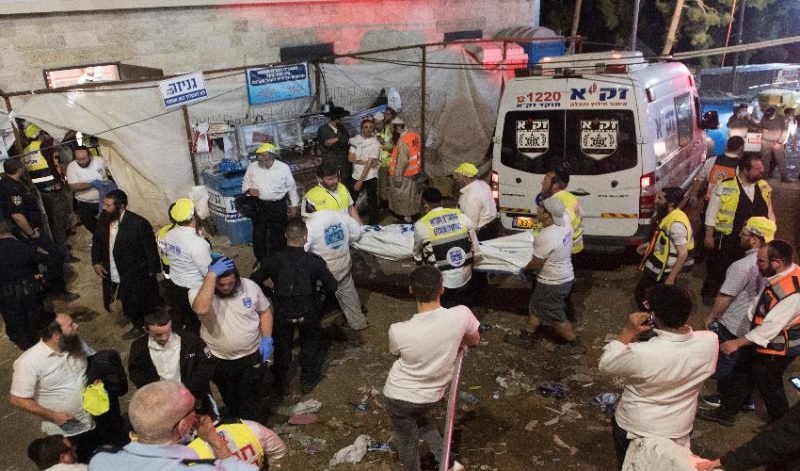 At least 45 people were killed, and over 150 more were injured at a religious festival for ultra-Orthodox Jews in Israel. There were no restrictions on the number of people who could attend the event.

The exact number of people who attended the festival is unknown; but it was believed to be tens of thousands of people. It was Israel’s most prominent gathering since the beginning of the pandemic; and it quickly took a turn for the worse.

The stampede occurred on Friday at Mount Meron in Northern Israel. Ultra-Orthodox Jews were celebrating the festival of Lag BaOmer, where there is dancing and bonfires at the Galilee Tomb of a rabbi who preached in the 2nd century.

The tomb features a staircase which was the site of the stampede. At 1:00 AM, after hours of partying, people were trying to flock up a staircase.

People were pushing to get up the stairs, and the lack of organization caused people to start falling. Continued to lose their footing on the stairs, but nobody stopped trying to climb the steps.

It appeared like there was a rush to get to the top of the stairs because people were forcefully shoving their fellow citizens out of the way to get to the exit.

Witnesses in the staircase said that the people who died were trampled and unable to get back to their feet because of the onslaught of people. The religious festival in Israel, was separated by gender, so the stampede only occurred where the men were celebrating.

Although, children were included in the festival with the men. The exact proportion of people who died has not been announced, but medics have confirmed that a portion of the casualties were children, making this event more tragic.

Why Were There So Many People?

Israeli officials have said that this bonfire celebration attracted more people than usual. This was the first celebration where there were no COVID-19 protocols.

Bonfire festivals in Israel are common, so they do not attract massive crowds because of their frequency. Therefore, festival planners did not expect substantial crowds.

Israel’s Director of General Medicine, Hezi Levi, was concerned about the virus spreading. Although, COVID-19 was an afterthought once the trampling began in the staircase.

“I expressed yesterday my concern of gathering together of hundreds of thousands of people who are coming to celebrate the Lag BaOmer, and we spoke about a scenario that might be very dangerous regarding corona. We are not sure that everybody is vaccinated. We know children under 16 years old are not vaccinated. And it’s very dangerous to transfer the disease.”

Health officials had estimated that 100,000 people celebrated before the festival became deadly. No burials can occure on the Jewish Sabbath, which starts at sundown on Friday, so the festival could not have come at a worse time for the families of the deads.