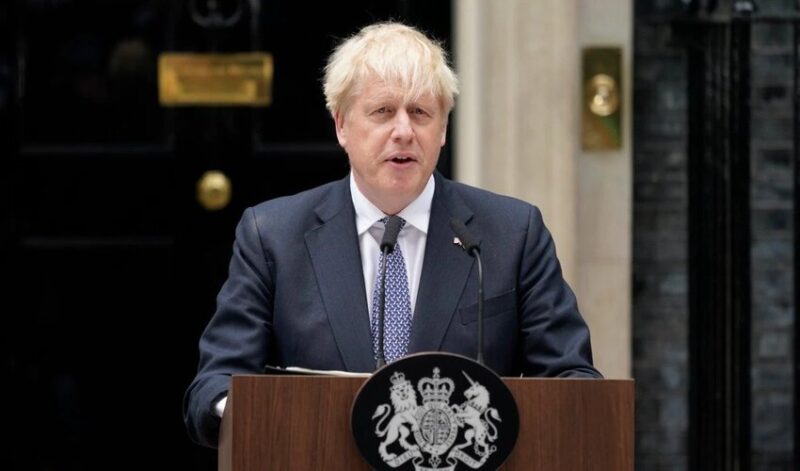 Boris Johnson resigns as UK prime minister, in a resignation speech delivered from Downing Street, but will remain in post until a new leader is found.

The outgoing PM promised his newly formed Cabinet that he will not use his remaining time in office to make “major changes of direction”.

He has become the latest Conservative prime minister to be forced out not by the electorate but by the party. The colleagues who supported him overwhelmingly for the job have lost their faith in him.

Reports suggest that he wants to stay on until the Conservative Party conference in October, but some Tories want him to step aside within weeks, rather than months.

After announcing that he would resign in the face of widespread resignations from within his own party and government, Prime Minister Boris Johnson addressed the country on July 7, 2022.

The loss of office is always a human tragedy as well as a political event – but in this case, it is difficult to feel too much sympathy: this was a statement made without sorrow:

“It is now clearly the will of the parliamentary Conservative Party that there should be a new leader of that party and therefore a new prime minister, and I have agreed with Sir Graham Brady, the chairman of our backbench MPs, that the process of choosing that new leader should begin now and the time table will be announced next week. And I have today appointed a cabinet to serve, as I will until the new leader is in place.”

Addressing why it took so long to resign despite more than 50 resignations, Mister Johnson said he had tried to persuade his Cabinet it would be eccentric to change Prime Minister now but “I regret not to have been successful in those arguments”.

He also acknowledged that “in politics, no one is remotely indispensable” as he announced his resignation as Tory leader.

A vow to the people of Ukraine

The Prime Minister made clear his reluctance to leave office, touching on personal highlights of his time in office as well as making a new wow to the people of Ukraine.

He said “let me say now to the people of Ukraine that I know we in the UK will continue to back your fight for freedom for as long as it takes. And at the same time, in this country, we have been pushing forward a vast program of investment in infrastructure, in skills, and tech knowledge, the biggest in a century”.

He told the nation he had decided to step down after failing to convince his Cabinet he should stay. The outgoing Prime Minister appeared to show little contrition over the circumstances which led to his resignation, suggesting he had been forced out by a “herd instinct” in West minister which was too powerful to resist.

Finally, the Prime Minister thanked his wife, family, and the civil service in his speech: “I want to thank Carrie and all children, and all the members of our family who have had to put up with so much for so long.”

He also said, “I would like to thank the peerless British civil service and the fantastic NHS who helped to extend my own period in office”.