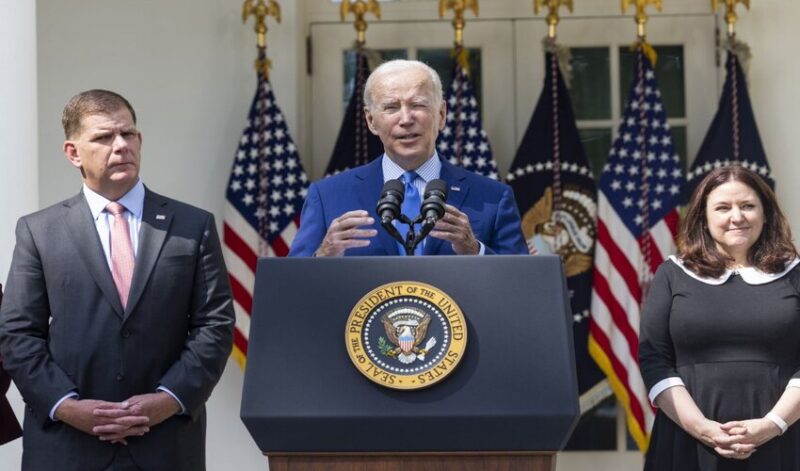 Railroads and workers’ unions threatened to shut a major segment of the U.S. transportation network to which President Biden announces tentative deal to avert a national rail strike, early Thursday.

About 40% of the country’s trade is done by rail and with the workers’ unions going on strike, more than 7,000 trains would stop trading causing damage of almost $2 billion per day. The parties were trying to negotiate for years without any resolution.

There was a last-minute deal that avoided major disruptions to the transportation of goods across the country. The deadline for negotiation was midnight Friday morning, the end of a “cooling period” The parties took 20 hours of a marathon negotiation before reaching a deal.

The White House announced that a tentative agreement has been reached between rail companies and the unions. While announcing the agreement, President Joe Biden said in a statement “The tentative agreement reached tonight is an important win for our economy and the American people”

“It is a win for tens of thousands of rail workers who worked tirelessly through the pandemic to ensure that America’s families and communities got deliveries of what has kept us going during these difficult years” President Joe Biden added.

This previous week the rail companies ceased the transportation of many hazardous materials, including chlorine to water treatment plants, and chemicals for fertilizers.

The new contracts provide rail employees with a 24% wage increase during the five-year period from 2020 through 2024, including immediate average payouts of $11,000 upon ratification, according to the Association of American Railroads.

The agreement also allows for an extra paid day off for workers, according to a joint statement by the labor unions.

In the past, most recently in 1986, Congress has acted to end railroad strikes. If no agreement had been reached this week, both houses could have passed a joint resolution – that the president would have had to sign – effectively forcing the rail workers to keep working under terms laid out by an emergency board established by the White House earlier this year.

The U.S. Chamber of Commerce had urged Congress to stand by and be ready to intervene before Thursday morning’s agreement was announced.

In a statement lauding Mr. Biden and the labor secretary for their roles in the negotiations, Speaker of the House Nancy Pelosi confirmed that Congress had “stood ready to take action… to ensure the uninterrupted operation of essential transportation services.”

“Led by the Transportation and Infrastructure Committee the House prepared and had review legislation so that we would be ready to act, pursuant to Section 10 of the Labor Act,” said Pelosi.

In an interview with NPR, Secretary of Transportation Pete Buttigieg said the proposed deal will bring not just pay increase and quality of life improvements for workers but will help the railroads as well.

The bottom line: The labor dispute on the rails highlighted yet again how the pandemic surfaced unrest and dissatisfaction in the workforce, as well as the still-recovering fragility of the nation’s supply chain.

According to JazzSports Political Futures Odds, Joe Biden is a +250 favorite to win the 2024 presidential election.

Don’t forget to check the latest betting on political events. Follow us on Social Media for more about US Political updates. Go to politics betting for more news