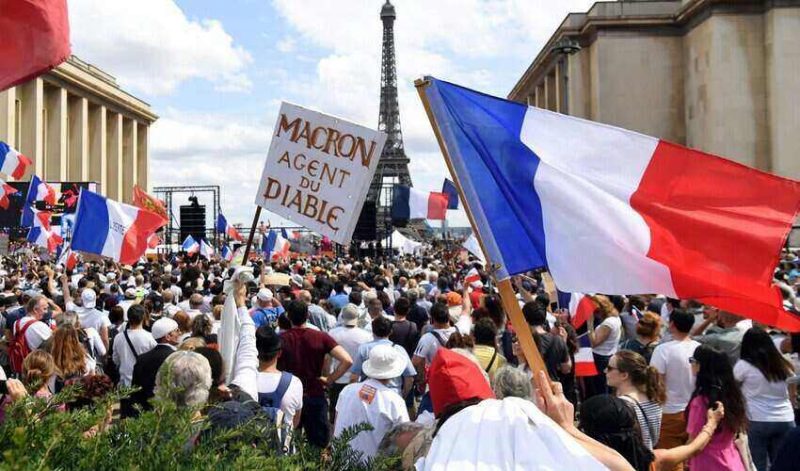 Earlier today, the French Police clash with anti-vaccine demonstrators amind massive public tensions over newly announced regulations. COVID-19 is not over throughout the world. Lawmakers are trying to limit the spread of the virus in a variety of ways. In the United States, there has been a revitalization of masks to help prevent the spread of the virus. In France, similar demands are being put in place by the government.

But, the country is making these rulings very strict. The government is preventing people from making their own decisions. Police in Paris used tear gas to combat riots over the latest health passes on Saturday. Health passes are an announced measure by the French government.

They are there to separate vaccinated and unvaccinated people. If citizens do not have a health pass, the government is trying to prevent them from going to restaurants, movies, and sporting events. Some lawmakers have declared that this is a critical measure. But, it has received a ton of pushback.

The riots in Paris have progressively gotten worse over the past week. The tension peaked on Saturday. That’s when the government mandated that citizens receive a health pass. If not, they would not be able to do certain things in the country.

Over 3000 police and riot control forces were in Paris. Why? Because lawmakers knew that citizens would not be happy. The legislature was correct. As expected, the riots became worse than ever in the capital. Police battled demonstrators and used tear gas to prevent riots.

There were protests all over France, but the biggest battles came in Paris. No surprises there. After the riots, the police arrested ten protesters in Paris and nine in other parts of the country. This is a minimal number considering how violent the riots were in France.

Does France Have the Right to Impose Regulations?

France is trying to detain citizens and force them to receive vaccinations. Many people believe this is against their rights, so anti-vaccine demonstrators have been fuelling riots across the globe.

Lawmakers have the best interest of the people. In France, the legislature thinks that this is necessary to save the country. France has locked down multiple times. They are trying to prevent this again from occurring.

Beginning August 9th, the country will require that citizens get their COVID shots, have a negative COVID-19 test, or have recently recovered from the virus. If they fit one of these categories, they will be able to enter restaurants and other hospitality venues.

If a person refuses to utilize a health pass, they will only be able to make essential trips. We’re talking grocery stores and doctors’ appointments. Most health care workers are vaccinated, but if they are not, they must be inoculated by the middle of September.

Furthermore, 52% of France’s population had their COVID shots. Most people support the health pass, but the government expects riots to continue.