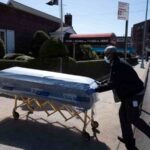 U.S. life expectancy: COVID-19 has devastated the entire world, and the United States has been hit extremely hard by the virus. There have been 27.9 million cases and 490,000 deaths in the United States thus far.

Some American medical professionals have estimated that COVID-19 deaths could push the one million mark in the U.S. before the virus is contained. These deaths have caused the American life expectancy rate to plummet.

U.S. life expectancy has dropped by an entire year. This new life expectancy was based on the deaths caused by COVID-19 in the first half of 2020. Health officials recently released the latest data.

U.S. Centers for Disease Control statistician Robert Anderson stated that a one-year drop in the American life expectancy is monumental. Life expectancy has been consistently rising in the United States.

Anderson noted that a drop like this had not been recorded since World War II in the 1940s. World War II was the deadliest war of all-time, so the latest life expectancy drop is very significant.

The Devastation of COVID-19 on Individual Groups

America’s overall life expectancy dropped one year, but individual racial groups were affected to different degrees. The CDC estimated that African Americans lost three years off of their life expectancy. This was the largest drop, followed by Hispanics who have lost two years since COVID-19 struck the nation.

COVID-19 impacted subgroups of the population underlying health issues. People with heart disease have lost years off their life expectancy because of the virus’s impact on heart conditions. Deaths from cancer were considerably heightened as well in the last year because of COVID-19.

However, 2020 was the deadliest year in United States history. Over three million people died last year, so when the CDC accounts for the total death toll, the life expectancy will worsen.

The African American life expectancy is now 72 years of age. White people live an average of 78 years, and Hispanics live just under 80 years in the United States.

It’s believed that white- vs. blue-collar jobs have caused minorities’ life expectancy to be negatively impacted. 20% of the world’s COVID-19 deaths have occurred in the United States, and this number will probably also continue to rise.