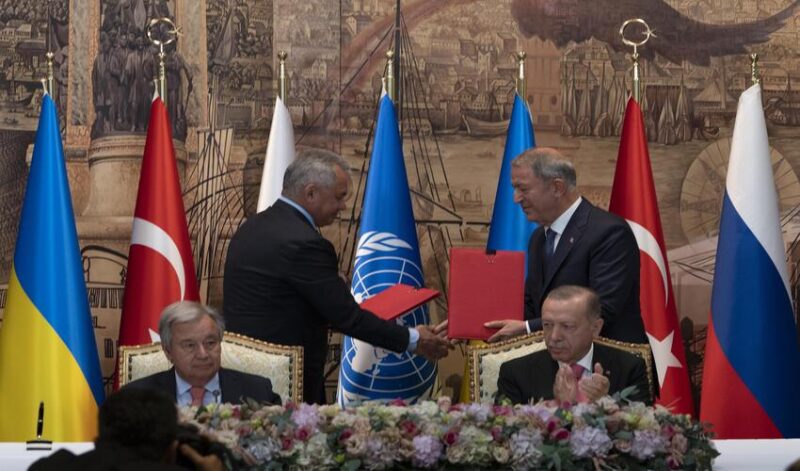 A new round of talks between Russia, Turkey, and Ukraine on the export of Ukrainian grain is set to take place in Turkey on Friday, July 22, 2022, according to a top Ukrainian official. Here are the Russia-Ukraine latest updates.

Recep Tayyip Erdogan, president of Turkey, has said the grain export deal will prevent billions of people from facing famine at the signing ceremony in Istanbul for a grain export deal between Russia and Ukraine.

Erdogan called on Russia and Ukraine to end the war, saying that it does not only affect those involved but the whole world. He said the war would have to end at the negotiating table.

He praised the positive atmosphere that Turkey had been able to bring to these negotiations and that he hoped this grain deal would be a turning point.

Russia and Ukraine are both major global wheat suppliers and Russia’s invasion of Ukraine has sent food prices soaring.

UN Secretary-General Antonio Guterres has been working on a plan that would enable Ukraine to export millions of tons of grain stockpiles that have been stuck in Ukraine’s Black Sea ports due to the war – a move that could ease the global food crisis. At least 22 million tons of grain are stuck in Ukraine.

Ankara said a general agreement would now be put into writing by the parties. Details of the agreement were not immediately mentioned. The due date to sign the agreement is Friday Erdogan’s office said.

The deputy UN Spokesman Farhan Haq mentioned to the reporters in New York that “the situation remains a little bit fluid, so I can’t really say when something will be signed. We are not quite there yet”.

Regarding the deal, the Turkish Foreign Minister said that the talks were going well and that he was very hopeful for the deal to happen. While Ankara said that during the Istanbul visit last week, a general agreement was met and that he wants to put this in writing this week.

Lukashenko, Russian President Putin’s top ally has mentioned to the news in an exclusive interview that “We must stop, reach an agreement, end this mess, operation and war in Ukraine. Let’s stop and then we will figure out how to go on living”

The UK to supply weapons to Ukraine

The UK has agreed to send artillery weapons and more than 1600 anti-tank weapons to Ukraine to help strengthen its defense against Russia, UK Defense Secretary Ben Wallace has said.

Wallace told the news that “Together with our international partners, we will ensure Ukraine has the tools to defend their country from Putin’s illegal invasion”

Wallace also added that the UK will also provide hundreds of drones and more than 50,000 rounds of ammunition to Ukraine.