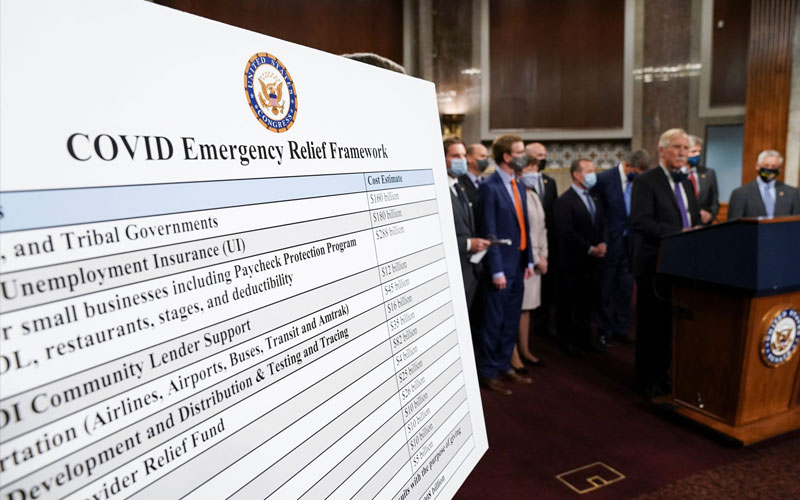 New Covid-19 relief: We have reached a point where congress appears to be at a stalemate in pushing through a new COVID-19 stimulus package. It’s a situation that has been brewing for quite some time now. With the holidays fast approaching and the end of session in sight, the time to get a deal done is quickly running out.

The stalemate in congress has prompted lawmakers to put forth a $908 billion relief proposal that is designed to adopt a bipartisan approach to what s very much a divided congress. Whether this package, which is a stop-gap measure that would carry over into April of next year, will bring both sides together remains to be seen, but there are senators on both sides who agree that not getting something in place before the end of session would need to be viewed as a massive failure.

The Problem Solvers Caucus, which contains bipartisan member of the House and moderate senators, have been meeting for the past month in a group of informal sessions in an effort to put together a temporary relief package. While this is certainly not yet a last-ditch effort to get a deal passed, it may well be enough to get both sides on board before it becomes too late.

Before we continue with our Political News Today, make sure to check out some of the early POTUS 2024 Odds appearing right below, courtesy of online oddsmaker JAZZSports.ag:

Political polls certainly suggest that the American public is growing weary of waiting for another stimulus package to arrive. With unemployment number still high and many families staring down the barrel of a rather bleak holiday season, it is important that congress takes a serious look at this proposal.

It should be noted, though, that the proposal does not include another round of stimulus checks, but it does include $180 billion set aside for a boost in unemployment insurance, which comes out to about $300 per week. It also includes a further $288 billion set aside to help small businesses survive.

The $908 billion price tag of this proposal may prove to be tempting to many senators who have been balking at the potential cost of the proposal that is currently being debated. Whether that alone is enough to get both sides talking and ready to make a deal remains to be seen. At least looks like a positive step in the right direction.

Get REAL, UNBIASED coverage of the latest political news with World Politic News. Follow us on Social Media to receive instant updates on the latest changes in political betting odds.