JAPAN EXTEND A STATE OF EMERGENCY IN TOKYO 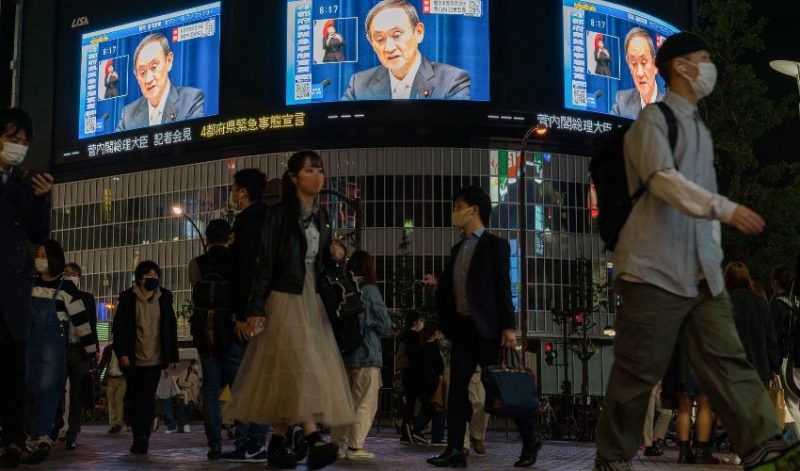 As the coronavirus spreads in Japan, one of the world’s least vaccinated countries is showing signs of social and political pressure.

The government is desperate to convince a worried public that virus efforts are under control; even as it pushes a massive sporting event that a lot of Japanese oppose hosting in a pandemic.

Japan announced on Friday that it would extend a state of emergency in Tokyo and other areas until May 31.

The emergency declaration is a health measure; as well as a political tightrope walk for Prime Minister Yoshihide Suga, as domestic criticism of Japan’s apparent determination to host the Olympics at any cost.

“I understand there are concerns about hosting the Olympics. It is possible to hold a safe and secure Olympics while protecting the people’s lives and health.” Suga said.

The government has also been criticized for its slow vaccine rollout, which has only reached about 1% of the population since vaccinations began in mid-February.

Frustrated Japanese on the streets

Commuter trains are packed with people returning to work after a week-long national holiday. Since bars are closed, frustrated young people drink in the streets.

Despite calls to stay at home during the holidays; tourist spots like Kyoto and Nara were visited for more people than last year. Younger people carrying canned beer and snacks gathered in parks and streets in downtown Tokyo as drinking establishments closed. Several people defied calls for remote work and rode crowded trains back to work once the holidays over.

Japan has resisted imposing a strict quarantine to combat infection; and previous states of emergency have lost teeth, with citizens and businesses free to ignore the rules.

These steps have since been toughened, but they come at a time when people are becoming more impatient and less willing to comply, making the emergency declaration less successful.

Get REAL, UNBIASED coverage of the latest political news from our experts at World Politics News.
Follow us on Social Media to receive instant updates on Politics.