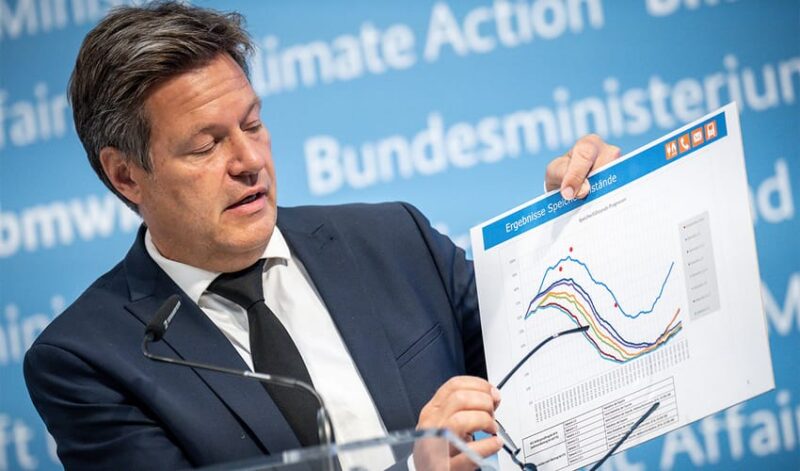 Germany declares gas crisis shortage after Russia throttled its supply over the invasion of Ukraine.

Germany activated the second phase of its three-stage emergency plan for natural gas supplies, saying Europe’s biggest economy faces a crisis and warning that storage targets for the winter are at risk due to dwindling deliveries from Russia.

“Gas in from now on in short supply in Germany.” Economy Minister Robert Habeck told reporters at a press conference in Berlin. “Even if you don’t feel it yet: We are in a gas crisis.”

Households should be protected for as long as possible, while industry would have to put up with shortages, the government said, according to the German TV network Tagesschau.

The crisis and sky-high gas prices add to the headache facing policymakers already fretting about the surging inflation and a dimming economic outlook.

Habeck called on Germans to reduce their consumption as part of a national effort to prepare for the upcoming winter months.

The German government’s decision to raise the level to “alarm” follows the cuts to Russian deliveries made since June 14, 2022, and the continued high market price for gas, he added.

“We are in an economic confrontation with Russia,” Habeck said.

Germany, Austria and other European countries are now turning toward coal and oil-fired power stations so more gas can be diverted into storage for heating homes during the winter.

Europe has tried to reduce its reliance on Russian natural gas since the invasion of Ukraine in late February. Germany has managed to reduce Moscow’s share of its imports to 35% from 55% before the start of the war.

Germany’s economy ministry said bringing back coal-fired power plants could add up to 10 gigawatts of capacity in case gas supply hits critical levels. A law related to the move will go to the upper house of parliament on July 8.

However, continued coal use would reverse Europe’s pledge to phase out coal and other fossil fuels. Calls are growing for the faster development and rollout of renewable energies.

To the horror of environmentalists, the German government announced that it would increase the burning of more polluting coal and reduce gas use for electricity production.

Currently, Europe’s gas storage facilities are 55% of capacity. Europe announced last month that it aims to reach 80% of capacity by November.

The declining pipeline flows from Russia have raised doubts over whether the EU storage target can be achieved. The Nord Stream 1 pipeline that carries gas from Russia to Germany is due to close for maintenance next month.

Germany and Italy are among the most reliant on Russian natural gas, but other European countries have also faced gas supply shortages while consumption has risen unusually high for the time of year after a heatwave boosted the use of air conditioning.

Analysts, however, say Europe will struggle to replace Russian gas within the next few months and warn that a cold winter would exacerbate the crisis.

Habeck placed part of the blame on political decisions by past German governments to rely on Russia for energy supplies and a failure to establish alternatives.